Angels on his shoulders 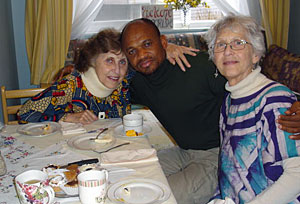 First off, Bartholomew is safely here. He spent the night in Comox and Jan drove him to Campbell River this morning. Gerri is elated, delirious (her word) with joy (my clarification), she sounds like her old self, strong. And, on top of it all, today, Gerri had NO PAIN!. That's the short of it.

Here is the long of it.
Bartholomew flew from Baltimore to Dallas, to Vancouver, to Comox. He initially had 1hr 30min. in Vancouver to clear customs, claim his bag, walk to CMA, check in, go through security, take off for a 9:30pm departure. When I checked his Dallas flight it was 30 minutes late, and I started having small twinges of concern. I was thinking of customs and how they can be...

At 9:00pm the phone rang. The conversation went something like this: (IO = Immigration Officer, M = Me)


IO "Hello, I am with Immigration at Vancouver Airport, Mrs. Henriksson, are you expecting someone tonight?"
M "Yes, I am expecting Bartholomew Mokuh."
IO "He is standing right here. How do you know him?"
M "He is the son, well, adopted son, of a very good friend of mine."
IO "Have you met him before?"
M "No, I haven't."
IO "So you don't know him."
M "No not him personally, but I know my friend and how close they are, and that's enough for me."
IO "What's her name? How did they meet?"
M "Gerri Graber. He worked with her in Chad, she lived there for 5 years. She is not his birth mother, but she is close to him like a mother, and she is dying and he is coming to visit her, is there a problem?"
IO (concerned voice) "Oh, he didn't tell me that. Why did he tell me that he just came to visit  friends?"
M "Perhaps he didn't think it was important for you to know that detail. Besides, he is right, he is visiting friends, he has a lot of friends here. They are all waiting for him. Look officer, his flight is leaving in 30 minutes, it's a long walk, will he make it? Would you be able to point him in the right direction, or have an agent help him find the CMA counter?"
IO "We can't usually help in this way. But he'll be OK, the airport is not busy. He can go right now."
M "Thank you."

My twinge of concern grew to more of a pinch.


M "Hello!"
IO "Hi, we talked earlier, I am with Immigration?"
M "Yes?"
IO "Just wanted to tell you that Mr. Bartholomew made the flight; I saw him checking in, he is on the flight."
M "Thank you so much for calling. That's very kind of you!"

Relief flooded through me.

At 10:10 at the airport, about 8 people deplaned, all white, no Mokuh. Was just about to check with an agent, thinking perhaps he was going through to Campbell River by mistake, and another passenger, a young man approached me and asked if I was waiting for someone off the flight. Yes, a black man, I said. He'll be here, he said, he was paged with a message and was talking to an agent.

And there he was. Tall, lanky, eyes a little glazed with fatigue, and tentatively smiling. After a quick, relieved hug, I asked him about the message. Well, apparently the Immigration Officer noticed that my business card was left on his desk and became concerned that Mokuh was arriving without contact information, meeting someone he didn't know. So he sent a message to CMA with that information in case Mokuh had to call me... Mokuh later told me that in Vancouver, after hanging up the phone, the Officer called CMA, asked them to hold the flight, grabbed Mokuh by the arm, marched with him to the CMA counter, and made sure he made the flight.

I told you, it was the long of it. What a story though. Unfortunately we don't know the name of this Officer, but the Immigration Department will hear about this. There are people who are truly kind Angels in disguise.

We didn't know either that Mo, Gerri's brother-in-law (I hope I got that right) was also at the Vancouver airport. Concerned that Bartholomew might miss the flight to Comox, they hoped to find him and would have put him up for the night. Angels abounded.
Posted by Marianne for Gerri at Friday, January 21, 2011 5 comments:

We are getting into a groove now. When I read Gerri's messages and call to tell her who has written and what needs doing, I get a sense that her days are quite full with appointments of visiting care-takers, therapists of one kind or another, nurses, the cable guy (yes, really). There's lots of administrative stuff to do that nobody thinks of until their days veer into the extraordinary.

The drug schedule alone takes a lot of organizing. Take this pill before food, this one with and that one after. Some every four hours. Gina has to get up even at night to administer pain meds at regular intervals. But with this rigid schedule the terrible pain seems to be under better control. No wonder that regular naps are in order for both women, whenever possible.

Her visitor schedule is also full. Tomorrow her brother will arrive, leaves the next day, then Bartholomew, after that her sister, and so on. Well into February. Time is getting very precious. So, again, dear friends, Gerri is asking for your understanding that she has to limit visitors, phone calls, deliveries, and other interruptions to conserve her strength.

Some friends mentioned that they tried to leave a comment on the blog, but I have not received notification of it. All comments are monitored to avoid being spammed. If you like to leave a comment, Gerri will hear about it. At the bottom right of each post is a link to "0 comments". Click on that and you'll see a comment form. All comments are approved if they are from a legitimate source.

Bartholomew is so looking forward to his visit and has sent some pictures he calls Souvenirs from Africa, in the meantime. The menu link is on the top right of the right sidebar.
Posted by Marianne for Gerri at Monday, January 17, 2011 1 comment: 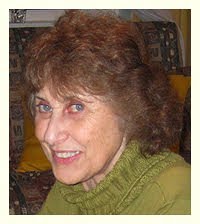 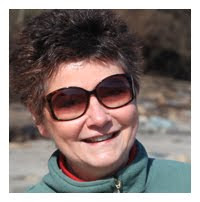